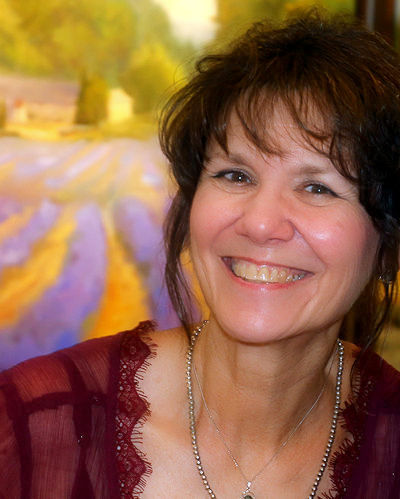 As the only daughter of an internationally known geologist-oceanographer, Abbott lived in coastal and sunny communities for most of her growing up years.

You might even say that sun and sea are part of Abbott’s DNA.  Born in Miami, Florida, and later moving to San Francisco before finally setting in San Diego, Abbott spent her childhood beach-combing.

Some of her fondest memories include sitting on her father’s lap in the captain’s chair of the USGS oceanographic yacht.

And she remembers her parents’ home as a tribute to the vast power of the world’s seas.

“My father’s home office didn’t just provide a practical work space for him.  He surrounded himself with treasures from the sea: glass fishing net floats, model replicas of the great clippers, sea shells from exotic and tropical destinations and photographs of his oceanographic expeditions,” she says.

And there was art.  The son of a Polish immigrant and professional artist, Abbott’s father had a profound love and appreciation for fine art.

“Mom and Dad collected art from all their travels.  And their taste was rather eclectic.  I remember being fascinated by a Picasso print that hung in our home’s primary passageway.  But Dad’s favorite compositions were those that featured the ocean, classic sailing vessels and the sunny, desert climate of the Wild West.”

“I suspect that my father’s adventurous spirit influenced my early love of landscape paintings.  That, and an idea planted by Dick Van Dyke’s character, Bert, in Disney’s classic, Mary Poppins.  You see, the idea of popping in and out of sidewalk paintings always appealed to me. And so, from an early age, I began sketching the places I wished to visit.  I created my own visual holidays,” she explains.

And in fact, Abbott’s ability to transport viewers through her art to another time and place has captivated many of her collectors. While attending an Abbott exhibit, guests will frequently announce, “I feel like I could step into her paintings.  I wish I could live there.”

“From an early age, I began sketching the places I wished to visit.  I created my own visual holidays,” Abbott explains.

Abbott recalls being inspired at age nine to paint the Swiss Alps after reading Johanna Spyri’s Heidi.  Since she could not live in Switzerland, she created her own “jolly holiday.”  No passport needed.

Abbott’s mother, a cartographer, helped her daughter hone the early drawing and drafting skills that would later serve her so well.

“As scientists, however, Mom and Dad were infinitely practical.  Dad had seen the life of a struggling artist up close and personal.  That’s probably why both my parents discouraged me from pursuing an art degree at University.  They viewed it as a beautiful past-time, but without any financial future.  I adored my parents and so, in my wish to earn their respect, I pursued journalism in college,” she says.

Yet, whenever she had opportunity, Abbott designed, sketched and painted. 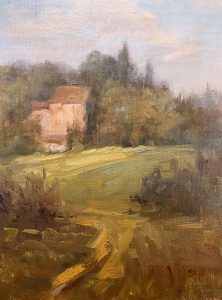 “Sometimes, I feel a little like Hans Christian Anderson’s girl in the red shoes.  Once I donned those ‘red slippers’—my creativity—I could not stop dancing.  The drive to create art overwhelmed me.  I found myself painting three and four pieces each week in addition to all my other responsibilities. Canvas and paint were my sirens.”

As she followed her unrelenting and demanding muse, Abbott continued to look for opportunities to further challenge her creative vision and skill.

“When I was given the opportunity to study under Scott Christensen, I jumped at the chance,” she says.

She credits Christensen with inspiring her pursuit of bold simplicity in both brush stroke and composition. In addition,  Christine Lashley’s mentorship has accelerated Abbott’s artistic growth in recent years.  Abbott also names Dave Santillanes and Hai-Ou Hou as contemporary artists who have strongly influenced her work.

But with a twinkle in her eye reminiscent of Robin Williams in his acclaimed film “Dead Poets’ Society,” Abbott lists J.M.W. Turner, John Constable, John Singer-Sargent and Rembrandt as her favorite “dead artists.”

“My personal delight in exploring light in land and seascapes is reflected in my favorite artists.  The dance of light, particularly upon the sea, captivates me.  I have never grown weary of it.  Light ever changes, and the sea powerfully sculpts the coastline. Both light and water, in their moment-by-moment transformation, provides new inspiration for both life and art,” Abbott says.

“Sometimes, I feel a little like Hans Christian Anderson’s girl in the red shoes.  Once I donned those ‘red slippers’—my creativity—I could not stop dancing,” Abbott says.

And quite frankly, if anyone understands the power of sudden and powerful life transformation, Abbott does. After successfully overcoming cancer, Abbott knew that she wanted art to occupy first place in her occupational life.

“Cancer served as my wake up call. I realized that I didn’t want to put off my life-long dreams any longer.  And so, ten years ago, I finally made a leap of faith and pursued my passion full-time,” she explains.

“As a cancer survivor, I find myself even more devoted to compositions featuring water and light.  After all, light reflects hope and water signifies abundant life. I’m convinced that both celebrate the power to overcome life’s shadows.”

Abbott’s work inspires overcomers around the world.  Her hope-filled compositions can be found in national and international collections.  In addition, her work is exhibited in Congressional offices on Capitol Hill.

An award-winning artist, Abbott has been recognized both locally and nationally. Her professional recognition includes first prize awards in both Regional and National shows at the Fredericksburg Center for Center for Creative Arts, a non-profit arts organization affiliated with the Virginia Museum of Fine Art. She was an exhibiting artist in the National Oil and Acrylic Painters society Associate Member Online Exhibit in 2021.  She has also been regularly juried as one of the top 15% favorites in Fine Art Studio Online’s Bold Brush Competition.

Abbott is a member of the Oil Painters of America, the National Oil and Acrylic Painters Society, and the American Impressionist Society. She is currently represented by The Cabell Gallery of Virginia Fine Art in Lexington, Virginia; and the 810 Gallery in Fredericksburg, Virginia. In addition, she is a member of the Professional Artists-Artisans Association of Stafford (PAAAS).

“Cancer served as my wake up call. I realized that I didn’t want to put off my life-long dreams any longer.  And so, ten years ago, I finally made a leap of faith and pursued my passion full-time.”

She spends most of her days creating in her 700 square foot, light-filled studio in Fredericksburg, Virginia.

When she isn’t painting, you are likely to find her wandering along the Rappahannock and Potomac Rivers or throughout the halls of the Smithsonian’s National Museum of Fine Art, a mere 40 minute drive from her studio.

Her parents’ legacy—a love for adventure—however, clearly shapes her time away from the studio. Abbott most enjoys exploring the world with her husband and son.